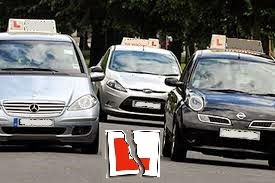 Where's Your Learner Driver Head At?

Now let's not get into an argument.

There are many factors in driving that an instructor can teach. Control skills, procedures, road traffic law, hazard awareness and the like. When we fall into the realm of attitudes and preconceived ideas things can get really messy really quickly. It can be an effort to keep a professional lid on it when personal issues and opinions come in to play which go against what an instructor knows to be right. How far should we go to confront negative attitudes in learners?
Some pupils find it hard to pass the driving test. Most people pass first or second attempt but a few will take repeated attempts before they are successful. Sometimes it's pure nerves getting in the way. What happens when it is how someone thinks that's the problem? For the first time in thirteen years of teaching I'm thinking of referring a pupil elsewhere to see if a different approach is the key.
When a pupil blames 'that stupid roundabout' for things going wrong there's not a lot of places you can go with it. Appealing to reason was my first choice. Explaining that a roundabout can't be stupid because it's just a roundabout, the same one everybody else is driving around without trouble. My words are greeted with laughter and no thought given to how the driving might not be up to standard. Not much chance of thinking how to put it right then.
Turning up late every time when they know I'm in an area covered in double yellow lines shows a certain lack of basic respect. When a pupil just doesn't see this and is repeatedly late it get's difficult. Asking to be dropped off at different places is fine with me. Just let me know earlier than 2 minutes before the lesson finishes. Again a basic disregard for others that doesn't show up on the pupil's radar. It's like simple courtesy is an alien concept to them.
When a pupil regales you with tales of friends who are obviously really bad drivers while laughing like it's the best thing they've ever seen you know it's going to be an uphill struggle. Explaining the moral obligations of being insured to drive can soon get tedious when your learner just doesn't care. Other's do it so why shouldn't they? My pupil started to break the speed limit. When I pointed this out I was told by my pupil that 'my friends drive much faster than this'. Six points in two years here methinks.
This pupil is actually a really nice person. As we discuss these issues I can feel what should be tuition descending into argument. I don't ever want to get shouty with a pupil so I keep my breathing nice and slow while I put my side across. There is much more emphasis on attitude coaching in driving instruction these days. I don't think we have much chance of changing those attitudes that are deeply ingrained and constantly supported by others outside of driving lessons.
In an age of complaints and people taking offence over any tiny thing we need to tread carefully when arguing the point. Pupils are paying customers and expect to be treated well during lessons and quite right too. There does come a time though when pressure has to be applied in the nicest way possible. Before I tear what's left of my hair out. Ha.