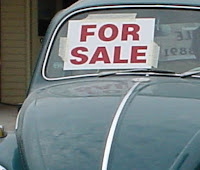 I thought never trusting a car salesman was just a myth.

I got mis sold a pcp agreement last month. I'm investigating the matter to see what can be done. Nothing like this has ever happened before and I've got to say I didn't enjoy the experience. Here's the lowdown.
After receiving a letter from my local dealership suggesting I could trade my car in now under favourable terms I visited the showroom on Mansfield Road Nottingham. I explained that I was a driving instructor with an annual mileage of around 35000 and that my current vehicle was bought as new from the same garage under an HP agreement. I gave the mileage on my previous vehicle at around 72000.
I was shown that the new monthly payment on a PCP plan was only slightly higher than my current HP payment with a definite resale value at the end. I asked the sales guy why the trade-in price was higher than that my previous car. He replied that the new model would trade for much more than the outgoing model. He explained that by trading in every 2-3 years I needn't be concerned about the final payment. The figures looked good and the monthly payment would be manageable to my business. The fact that these figures are based on an annual mileage allowance of 20000 was not disclosed to me at point of sale. This product was sold to me in the full knowledge that my annual mileage was way in excess of this figure and would render the plan unsuitable for purpose.

I had no further contact with the dealership after paying the initial deposit either in person, by phone or email. Nothing was sent to me by post.

On Wednesday 22/04/15 I was contacted via mobile phone by the sales guy who informed me that the vehicle would be arriving at the dealership on the following Monday or Tuesday. I suggested getting dual controls fitted on the Wednesday 29/04/15 to which the salesman agreed.

I telephoned the dealership on Thursday 30/04/15 and left a message for the sales guy to confirm that the dual controls would be fitted at 9.00am on Wednesday 29/04/15.
I received a telephone voicemail message from the salesman on Friday 24/04/15 asking if there were any space needed for the fitting of the dual controls at the dealership. As there were no special requirements and I retrieved the message after 5.00pm I did not respond.

I had no further contact with the dealership until I arrived there at 8.50am on Wednesday 29/04/15. I made the sales guy aware that I was waiting for the arrival of Dual Control Services who arrived at around 9.50am. The car was positioned to allow access for the dual controls to be fitted. After removing the dual controls from my existing vehicle a new set was fitted to the new vehicle. Fitting was completed at around 11.00am . The previous vehicle was now unfit for purpose to use as a driving school car as the dual controls had been removed. The sales guy then informed me that the PDI would not be completed until 4.00pm and that paperwork had not arrived. I left the dealership and cancelled the afternoon's work with a view to returning at 4.00pm.

I arrived at the dealership at around 3.50pm. At this point the only paperwork I had seen was the deposit receipt dated 06/03/2015. I was informed by the salesman that no paperwork had arrived. I was apprehensive as I needed the new car for business the next day. I had arranged to meet a friend later but this could be cancelled. I also believed at this time that the dealership closed at 5.00pm ( I found out some time later that they actually closed at 7.00pm that day).

I sat and waited for around 40 minutes and was handed a contract at approx. 4.30pm by. I looked at it and signed. Then I noticed the previously undisclosed 20000 mile limit. I was shocked by this and queried it with the sales guy who informed me that I should have told about this at the point of sale. I also should have been called in to look over the contracts before signing. I discussed why I had not been informed of such an important piece of information when the salesman knew my annual mileage was well in excess of this. He explained that if I was trading in every couple of years it wouldn't matter. He told me that at trade in the deal was between me and the dealership and had nothing to do with the finance company. He said he would have a word with his manager and sort something out. There was some arguing and in all this I regrettably signed the sheet (already pre-ticked) that stated I had received the customer care in relation to explaining the contract. I had in fact received no such customer support.

I became frustrated at having the figure hidden from me but I had to take the car or close my business. I asked the salesman where the car was as the dealership was closing in 15 minutes. He replied that someone had gone to fill the tank with petrol. He did not use this opportunity to inform me that the branch was open until 7.00pm.

The sales guy then asked me for my driving licence. I replied that no one had told me to bring it. He asked if I could scan it and email it to him asap. I replied I lived about 15 minutes away and could do it as soon as I got home but remarked that the branch closes at 5.00. He replied he would be there until 5.30. He did not take this opportunity to tell me that the branch was open until 7.00pm.

At about 4.50pm the car was brought round to the front of the dealership and I complained there were no mats in the car. A salesman got some and I fitted them and left. I drove straight home in order to email my licence back by 5.30. At this point I had not been asked to show any ID before taking the vehicle.

I arrived home, scanned and emailed my licence back at 17.24. I asked Sales bloke for something in writing about the mileage limits and what we had discussed about them not counting. I noticed that in my haste I had left behind the contracts I had signed. I then left to meet my friend and on returning later that evening I checked my emails. The sales guy had replied and said he would contact me when he had spoken to his manager. He had replied at 18.55.

I returned to the dealership at 9.30 next morning to collect the documents I had forgotten the previous evening. Sales guy told me there were more documents to sign. I said I would sign nothing further until I had taken advice. I then left the dealership.

After finally having an opportunity to read the contract and realise it's implications I emailed the garage to arrange a meeting for the following Tuesday.

My friend and I arrived at the dealership at 11.00am. I discussed how I felt that I had been mis-sold the pcp plan. Sales guy was evasive and the discussion was not going anywhere. I asked if I could get the old car back and reverse the transaction. We insisted on seeing the branch manager. We were joined by the manager and I explained the situation. I had not been given any information up until the point of signing that would reveal the hidden mileage allowance. He simply pointed to my signature on the tick sheet. I mentioned that the company had assisted me in modifying a car that I hadn't signed a contract for. He said he didn't know anything about it.

After some discussion it was agreed that the manager would look at the paperwork with a view to reversing the transaction to square 1. I asked if it was possible to be compensated for the price of the dual controls and other expenses. Total expenditure on the vehicle including deposit was £673.00. The manager said he would telephone me later in the day with the result after looking at paperwork.

He telephoned me later to tell me the transaction could not be reversed. Reasons given were that the papers were signed and in order, the old vehicle had too high a mileage to finance back to me and I had put too many miles onto the new car. He assured me that the mileage allowance would not effect me at trade in. That was the end of the conversation.

I can't believe they would hide such an important piece of information. I didn't do any research because I have been using the place for over 11 years and I've never had a problem. I'll certainly be more careful in future as this mileage limit is going to cost me if I can't get anything done about it. Wish me luck...

Driving instructor in Nottingham
Posted by Unknown at 09:25 1 comment: