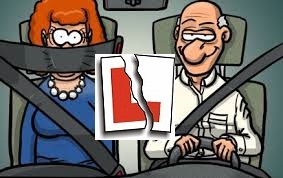 Let's not hear it for the back seat driver.

After a few years giving refresher lessons to more mature drivers I have noticed a common thread. When I ask the driver what they see as their weaknesses I usually get a very definite things that the driver feels need to be addressed. Upon further questioning it turns out that these problems are in fact opinions given by the driver's partner, positioned in the passenger seat offering unsolicited help and advice. Often from the standpoint of someone who has never driven.
One gentleman believed his observations and judgement of a safe gap when emerging from junctions left a lot to be desired. After 90 minutes of driving and a few pointers I felt that these skills were more than adequate and I couldn't really see a problem. The gentleman then told me about his short wife who has the passenger seat fully raised and as far to the front as it will go. From this position the nearside front window is completely blocked by the passenger who then proceeds to tell the driver whether to go or not. This is so very dangerous and totally unacceptable. I  informed the driver that he has to be able to see all around the vehicle and make his own decisions on when to emerge. The time delay from when he is told to go to when the car actually moves could prove well hazardous. Also he is relying on the judgement of a person who has never driven a car. Not an ideal situation at all.
I recently gave a refresher driving lesson to a lady who believed she was too hesitant at junctions and when meeting traffic coming in the other direction. Also she drove at well under the speed limit on faster roads and dual carriageways. When asked why she thought this she replied that it was her husband's verdict. As he was now visually impaired and had to give up driving, the lady I was teaching had to do it for him. After a good drive around Nottingham there were some issues with mirror use and early observations but absolutely no issues regarding hesitancy. I assured the lady that she should drive within her own limits and not bow down to the opinion of her passenger. She seemed relieved to hear this and I'm sure she will be fine on the road.
Passenger pressure is always considered an issue which only rally effects younger drivers but this is obviously not the case. People of any age and driving experience can succumb to pressure from friends or family in the car and feel they have to overstep their limits in order to satisfy another. It can be very difficult to ignore criticism and the driver may start to feel belittled and incompetent. The stress caused by this can have a detrimental effect on the quality and safety of the drive. A passenger who is late for an appointment or in a bad mood can put pressure on a driver which they wouldn't normally if they were in a relaxed mood.
I say to all drivers out there that you alone are responsible for your driving. Do as you judge fit when behind the wheel and don't let others influence you when it comes to safety.