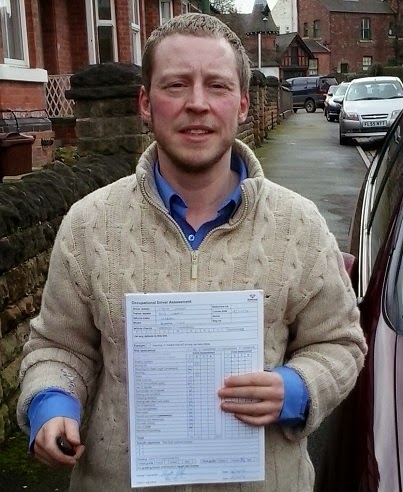 Today saw the completion of a 4 hour defensive driving course with Steve wright  (pictured here) in Nottingham today. He has shown some brilliant improvements to his driving and I've got to say I wish more drivers had an attitude like Steve.
The defensive driving course is usually done with company employees who have managed to collect points on their licence so it's refreshing to do the course with someone who just wants to improve their driving skills and become safer on the road.
We covered many a mile in Steve's Nissan during the course. It was divided into two sessions of two hours. First we went over all the knobs and buttons on the dashboard as the vehicle was bought recently and Steve had not had time to become familiar with all the controls. Pretty soon after that we were on our way.
Motorway driving was to a good standard with just a little drift in the steering. Even though the vehicle is large compared to most cars there was no problem with reversing and parking. Most of the work we had to do was in the area of observation and forward planning which is at the heart of defensive driving.
We worked on mirror use making sure that there was a full awareness of what was happening all around the vehicle. Not just to the front. As we progressed I noticed that Steve was making good use of all the mirrors, especially when it came to lane changing in busier areas. The same improvements were made when it came to spotting signs early and using them to navigate as well as taking note of warnings of potential hazards that lay ahead.
A relaxing country road drive showed how much the steering had improved from the first session.There was no drift at all. The vehicle was kept in a good position on the narrow country road despite some tight bends. Looking well ahead through gaps in the bushes to see where the road leads and gaining advance warning of approaching traffic really paid off with a smooth and safe drive. The whole experience was totally enjoyable.
Steve showed a lot of enthusiasm towards improving his drive. He will be driving for work soon so will be putting them into practice on a regular basis. Happy motoring Steve. It's been an absolute pleasure!