Is This The End For Windscreen Wipers? 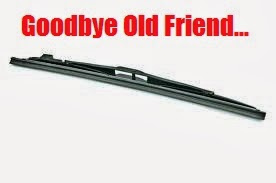 It was great while it lasted

It looks like the end is nigh for the humble windscreen wiper blade. Maybe not such a bad thing anyway. I don't know why but learner drivers seem to have real trouble with the stalk controls. I tell them to push up one click. They put them on full blast. Sometimes they put them on instead of indicating then the back wiper comes on and they're all confused. It can be a bit dangerous when they start looking at the stalk instead of at the road.
When it stops raining I see how long I can go watching them squeak across a dry windscreen, giving the pupil every opportunity to turn them off before I intervene but they never do. All this could be a thing of the past thanks to high frequency sound wave technology.
It's being developed by McLaren, the motor racing people. It's already being used on fighter aircraft and will repel water, snow and insects. It never fails and is always active. It's the same principle that the dentist uses to remove plaque from your teeth. When it is rolled out the cost of incorporating it into a vehicle at production will be less than the cost of a wiper blade. Let's face it, wiper blades are well expensive nowadays. The question I have is will they actually clean a windscreen like washers and wipers can?
it will be good for eco-driving enthusiasts like me who don't like paying for petrol as the car will be lighter because you don't have to have the motors which drive the blades. Might be a bit more aerodynamic as well I suppose. So it's goodbye wiper stalk confusion and hello fighter plane technology. You know it makes sense!

Qualified driving instructor in Nottingham
Posted by Unknown at 07:49