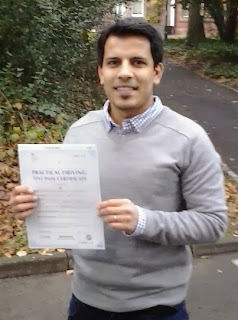 Here's a picture of Aziz Alzahrani who passed his driving test today at Beeston test centre here in sunny Nottingham. Being from Saudi Arabia he had been used to quite a rushed and some may say aggressive driving style. He's not an aggressive guy though, he's a really nice guy.
Good skills controlling the car and full use of mirrors were already in evidence. It was the rushed style and lack of forward observations and planning which we needed to work on.
After a few lessons the improvement in Aziz's driving was remarkable. A nice flowing and safe drive is what's needed to gain the driving licence and now that's what Aziz has got.
As a busy student who already owns a car Aziz is now free to carry out his career plans and can get himself around nicely. Thanks mate. I've enjoyed our lessons and wish you all the best for the future!
driving lessons Nottingham

Where can I see some great customer reviews for driving instructors?
Posted by Unknown at 03:59