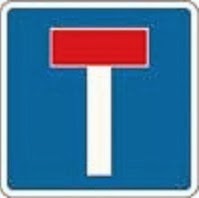 Worn out road signs are hard to see

I was doing a driving lesson on hazard perception and forward planning yesterday. As I was coaching my pupil and getting her to actively look for road signs I realised how many of them are in such a poor state.
Now it's winter and the leaves are fallen from trees and bushes you can just about make them out through the branches. In summer you've got no chance as the branches are never cut back to allow the signs to be seen. Big problem if it's a speed limit sign and you end up breaking the limit.
There are signs that have slipped around on the pole and now face in another direction. Some are tilted so much it look like they apply to a different road altogether. They need turning round and the metal bands tightening up.
The worn out signs have a post apocalyptic feel to them. Rusted round the ages and the printing faded so bad they are completely illegible. Like they are from a world that was abandoned long ago. I have an urge to get a brush out and scrub the ones that are covered in that green moss stuff. If I did the lettering would probably come off with it. Ha.
The Highways agency need to take on a few sign cleaners to keep everything neat and tidy in the interests of road safety. Never happen though. It would probably cost too much.
Why not learn to drive?
Where can I train for the Diamond advanced driving test in Nottingham?
Posted by Unknown at 06:10